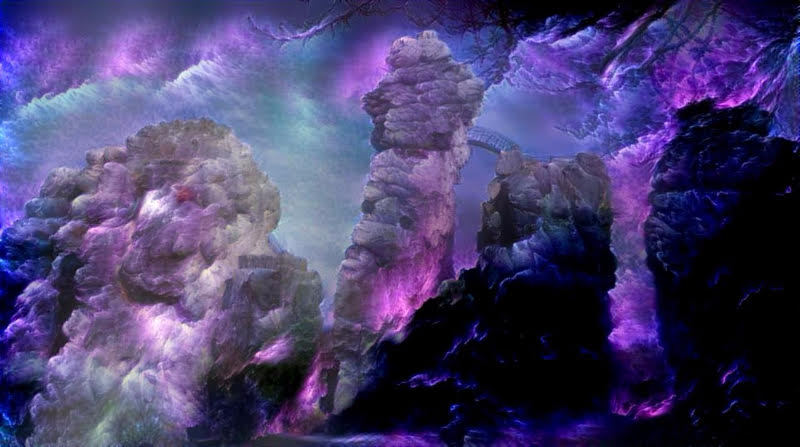 A drum beats. It grows louder, and is joined by another and another. The beating builds, thumping until the ground shakes, and the trees sway with the rhythm.

I am in the fabled Teutoburg Forest in Germany, a place packed full of pagan lore, bloody history, and ghosts. Strange…drums in the middle of this secluded woodland?  The sound is too rich, too real, to be a cell phone ringtone from another hiker.

I keep walking, following the beat to a bend in the trail. It’s leading me just where I want to go. The trees and the morning mist seem to part just to let me through. My heart skips, and I stop in my tracks. All falls silent.

They rise in front of me, a line of giants towering above the tops of the ancient oaks and fir trees. They are the Externsteine, a natural rock formation of thirteen massive stone pillars. Some are more than twenty times my height—megaliths created by the ancient gods.

I feel very small, and everything else seems trivial. I have come off-season and have this wondrous place to myself, just the spirits and me. As I stare in awe, I begin to see the shapes of faces, animals, and even mythical beasts in the cracks and fissures of the rock.

I take it all in for a moment, and then I feel the need to touch the rocks to know that they are real. The drums are beating again, drawing me to the tallest pillar. I reach and touch it, and yes, it is real, but what I feel defies explanation.

The Externsteine are a group of natural sandstone pillars that shoot up abruptly from the rolling hills of northwest Germany. You cannot stand in the Teutoburg Forest, in shadow of these startling giants, and not sense the seven million years of geology and 10,000 years of human history. The area has been occupied by a long succession of peoples, including Stone Age hunter-gatherers, Celts, Teutons, Saxons, and finally, Christians. Many spirits, ghosts, and legends are alive here.

Little is known for sure of the Externsteine’s history, but what intrigues me the most aren’t the facts but the unknown. For me, it was destiny that this mysterious place became the pivotal setting of my dark fantasy series, including Feast of the Raven and Return of the Wulfhedinn.

Theories about the Externsteine abound. Much speculation surrounds its possible role in pagan worship, especially during the era of Charlemagne. In the eighth century, Charlemagne conquered the Saxons, the local residents of the Teutoburg Forest. They were the last pagans in Germany, and Charlemagne was determined to make them Christian. In a long, brutal Holy War, he forced them to convert and destroyed their pagan monuments and sacred places.

The most offending blow to them was Charlemagne’s destruction of the Irminsul—the sacred “great pillar” or massive tree trunk that supported the pagan heavens. Some believe that the Irminsul was located near or at the Externsteine. It might even have been the tallest pillar in the formation. This distinctive tower soars over 120 feet tall, and has obvious phallic characteristics that would likely attack pagan fertility worship.

A small chamber is hewn into the top of the tower, complete with an altar niche. This room served as a Christian chapel in the Middle Ages. Above the altar is a small round window, which is aligned with the midsummer sunrise—a particularity pre-Christian feature that may date the chamber to pagan Germanic and Celtic peoples.

The pillar is connected to a neighboring rock by a bridge. A staircase cut into the stone winds all the way down to the ground. It’s easy to imagine ritualistic processions—pagan and Christian—climbing the stairs to the top.

There is another winding staircase cut into another rock. I begin to climb it, the echoes of Led Zeppelin’s iconic “Stairway to Heaven” playing in my head. The top of the rock is flat and open to the sky—an ideal place for more religious ritual or astronomical observation. The view of the forest and the other standing stones in the Externsteine formation takes my breath away.

At the bottom of this stone, Christians had a carved 12th century relief of Jesus’s Descent from the Cross. This is definitive proof that Christians worshiped here after the last pagan Saxons had been killed or converted.

There are also two grottoes that had been hewn into the rock at ground level. Hermits monks once lived in these stone rooms. Nearby is a huge boulder that had been carved into a stone sarcophagus in the shape of a human being. It is a chilling experience to cross your arms on your chest and lie down in the cold, hard tomb.

I smile when I think of Charlemagne. He would be dismayed to know that after more than thirty years of war to eradicate paganism, it is alive and well today at the Externsteine. Some modern neo-pagans consider it sacred and gather here every year to celebrate the summer solstice. It’s easy to understand the draw this place has for spiritual people of many faiths—and those wanting to meet ghosts of the past.

A black raven flies overhead, her shadow falling across my face before she perches on top of the tallest pillar. She tells me that there are many stories here—heroic legends, sacred myths, exciting adventures, and gut-wrenching tales of love and war.

I am glad that there is so much mystery surrounding this place of wonder and legend. History and fact are important, but dark stories thrive when spirits soar freely unburdened by data and research.